Thanks to everyone who joined us for the WSSM Meeting on the Air! We had 15 check-ins, a few of which were first time participants. The net started on time, at 7:00PM. Tim KB1HNZ served as moderator.

Among the items discussed were the minutes from last Thursday’s monthly business meeting, which included a reminder for Winter Field Day participants to get their logs in by the deadline of February 28th. Brad KC1JMH gave us an update on the Maine Packet Radio network, and also introduced a new website that he’s designed for it, which can be found here.

Tim KB1HNZ talked about creating a place where club members can coordinate helping each other out with ham radio projects, such as antenna installs, and that is live now. It’s called Helping Hams.

There was also an announcement about the annual Maine 2 Meter FM Simplex Challenge, which takes place Saturday, April 3rd, from 12PM-4PM.

Earlier in the day, Chris Wheeler at Cumberland County EMA contacted us and said they are looking for volunteers to assist with the vaccination efforts at Scarborough Downs. The job roles will be more along the lines of helping with traffic flow and observation than communications, but that may evolve. If anyone is interested in helping out, please contact Chris at: wheeler@cumberlandcounty.org. It’s a big job and they could use our help.

The topic for the evening was to “describe your antenna installations. If you have a wire antenna, how did you put it up?”

The informals began with Russ WA1JFX, who checked-in from Waldoboro. Russ described his 10-element beam and inverted V antennas. Next up was Roger K1DFA, who joined us from Bartlett, NH. Brad KC1JMH described some the misadventures of his first wire antenna install, which included getting a pole saw stuck in a tree! Jason W1SFS told us about the Spaulding tower and Hexbeam that he setup over the summer, and Eric N1RXR described using a fishing pole and weight to “cast” the line for his wire antenna. Ron KC1AOT described his setup, which includes a Butternut vertical for HF, while Jim KB1SDK talked about his Comet antenna on a painters pole and the fact that his dipole “slipped down onto the roof shingles.”

Next up was Frank, in Plano, Texas, who joined us via Echolink. Frank announced that he got a new call sign, KR5N. He described his G-Whip end-fed antenna and the E-Z Hang launcher that he used to put it up. Norris KC1OER, who checked-in from Portland, described his Arrow dual-band J-Pole, which was currently inside near a window. Ben KC1HBL, talked about his Diamond X300 antenna, and Pete KC1HBM also mentioned having the same antenna. Next up was Dave KB1FGF, who described his antenna setup, which includes a Diamond CP6A vertical in the backyard and a VHF antenna attached to his chimney.

We had a few late check-ins. Steve WZ1J (with club call W1GR), described his impressive operating conditions, which included a Yaesu FT1000D and FT847 among others for transceivers, and a pair of towers – one that’s 200′ tall and another that’s 90′. Waylon KC1HJN described his progression over the years from using a discone to his current Ringo for VHF, and a Cushcraft vertical for 20-6 meters and a 40/15m dipole for HF. Our final check-in was Jonathan KC1MXB, from Springvale, and Matt AC1KO let us know he was listening from Windham.

Two pieces of traffic were handled during the net:

After the close of the net on the repeater, the After Net immediately followed on 28.455 USB. Conditions were quite noisy. Tim KB1HNZ barely copied Eric N1RXR, and Jason W1SFS, but with much weaker signals than usual. 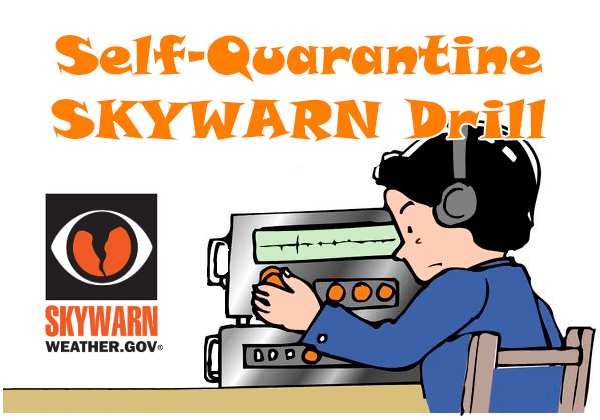 Join us this Thursday evening from 7PM-8PM, on 146.595 FM Simplex, for the Self Quarantine SKYWARN Drill. This will be similar to previous simplex drills, but the traffic to be exchanged will be your current weather, using the format of the Severe Weather Report Form, which can be downloaded here as a filable PDF. The goal will be to pass your traffic to WX1GYX, who will be checking in.

Once the net is secured on 2 meter simplex, those with DMR capabilities will be asked to check in on the DMR Talkgroup (759), where we will continue the net and take additional traffic from those who couldn’t get in on simplex.

We will also be accepting traffic via Winlink. Please send weather reports directly to WX1GYX.